A Word From Gene

There Are No Straight Lines

A straight line is the shortest distance between two points. Mathematically, that’s beyond dispute. However, in life, the trip from point A to point B is rarely, if ever, a straight line. A journey from anywhere to anywhere else is marred by detours, delays, zig-zags, setbacks, and countless other unpredictable obstacles that hinder our progress.

A well-written humorous piece that we are certain will impress the buyers, is summarily rejected. A stepping stone that we’ve meticulously groomed ourselves for, goes to another comic instead. Someone else gets the spot on the late-night shows that we were hoping for and counting on. A spot on a television writing staff that we know we can handle is awarded to what we consider a less qualified writer. We should prepare for these obstructions and resolve to accept them.

This doesn’t mean that we should endure them meekly. Not at all. Resisting or denying them, though, is futile. They exist. They happen to all of us who are progressing toward a goal. They can be painful and distressing. Certainly, we can allow ourselves some time to rant and rave against fate. However, the more time we spend feeling sorry for ourselves, the less time we can devote to continuing the quest.

There are certain situations that we have absolutely no control over. It’s a waste of time wishing that we could control them. We can’t. If you’re driving to a destination and you encounter a “road under repair” blockage it’s pointless to sit there and hope that the road will be repaired. It’s much more beneficial to find an alternate route.

That’s the wisest strategy for any of these setbacks – either find a way around them or turn them into assets. It’s not at all unusual that an apparent setback can become a blessing. A staff position you’re rejected for can enable you to be assigned to a different show that’s better suited to your skills or even a position you wanted more. This doesn’t happen every time, but the possibility definitely exists.

A more proactive scheme would be to investigate the obstacle. Why did it happen? Who could have caused it? How might you remedy it in the future? Study it extensively and use whatever you learn to improve your own approach. Consider an athlete who is near the top of his profession, but is still losing to many of his peers. If he learns that he’s being defeated let’s say because he moves too slowly to the ball, he can create exercises that increase his speed or quickness. If he finds his opponents have more strength than he does, he can workout to build his body. Listen to the obstacles you encounter as they tell you where you need improvement. Then diligently work on those areas.

Your career objective is to go from point A to point B. However, as the opening paragraph stated, this is not an effortless straight line. With determination, though, it is navigable. Try to accept the hindrances and either circumvent them or turn them to your advantage.

That’s how you get from point A to point B. Have fun along the way.

If you are a comedy writer or performer and would like more of Gene’s insights, sign up for Perret’s ROUND TABLE. An online newsletter with articles, markets, exercises and more.

Be A Standout in Stand-Up Comedy

You can find more of Gene’s insights into stand-up comedy in his book Be a Standout in Stand-Up Comedy. This title is available through ROUND TABLE or at Amazon. 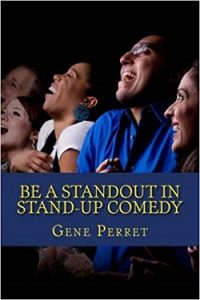 If you are thinking about changing careers, this is the book for you. In these pages, Gene provides a “practical guide to beginning a new career” that he used to go from electrical engineer to comedy writer to producer to speaker to author.

Gene’s newest book is now available in print at both ROUND TABLE and Amazon. You may also purchase a copy for Kindle at Amazon. 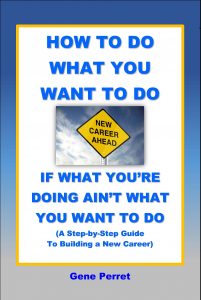 Gene’s other books Comedy Writing Workbook and Be A Standout in Stand-Up Comedy are available in print through ROUND TABLE or Amazon. They are also available for Kindle.

A 12-week email class that covers the basics of comedy writing.  Features lessons and feedback.

A 9-step program that takes the writer through the process of developing a monologue.  You will work on a topic of your own choosing.

A weekly exercise is emailed you for you to work on.  You return your work and we offer feedback on your material.

© 2023 Perrets' Humor Files. You are free to use jokes from this page in your presentations, speeches, act, publication, etc.
Site By: Hark.Digital